Indeed, this set the stage perfectly for the next event on the program, “Community Development and Organizational Change: Large scale industrial action research in the 1970s.” This consisted of a conversation between Fiddy Abraham and Elliot Stern, true pioneers in this work, as they presented what it meant to learn about organizational life in mines, on ships and at factories, during the tail end of the industrial era and the dawn of new dynamics of labor, automation, and democracy itself. They told amazing stories of embedding themselves in the communities where their industrial clients were located, investigating not only the factory floor or ship’s engine room, but also the social, communal and familial spaces and dynamics that shaped life there.

The experiments and action research they described were bold in scope and ambition. They seemed fearless in what they’d take on, and boundless in their energy. As you can see in their slides, their action research and findings ranged from the deeply psychodynamic to the highly socio-technical, and one can imagine that the outcome of their work touched these organizations and communities at all levels. 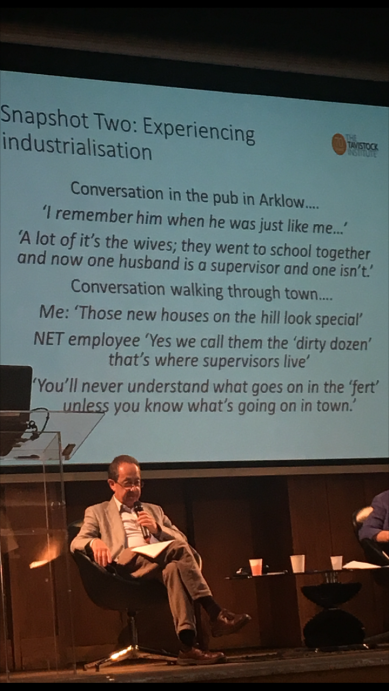 In fact, they didn’t stop there. As this poster from the archive suggests, they staffed entire ships to run experiments on how they might best function.

Learning by running simulations like this was decades ahead of its time, as was the hacker and mod- energy shown by the ship’s crews, released from their bounds and allowed to re-engineer their own work.

Stern related how “If people were given a voice, they were making changes all the time.”

In fact, the crew made so many hacks to a ship’s engine room, that when they were docked in Japan, and the Japanese ship building firm inspected the hacks and mods made by the crew, the Japanese firm patented them.

As if this wasn’t prescient enough, Stern described a process of note taking (and editing, and redaction) that seemed like the google docs collaborative document editing platform fifty years before its time. The researchers would take notes, get responses from their client, run those by management, show the changes management made to the union, and start the cycle all over again with their client. The iteration of something as banal as notes thus became a space for the negotiation of meaning and further emphasized the importance of process in the work.

Finally, when asked about how relevant this work was to today’s environment, Stern said he was pulled between three outlooks on the relationship between the past and present:

Within this tension, Abraham also offered a guiding maxim that seemed relevant:

“Plan for progression. Work with regression.”