The Art:Work exhibit at the Tate Modern last October offered experiential elements designed to make you wonder if you were doing labor or doing art.  You punched a time clock when you entered the exhibit, and you could choose between working on looms, converting text to binary data, or analyzing the value of your personal data to the internet giants that track and host it.

Strewn to the side, sitting unattended on a window sill, was a pad of order forms, each with boilerplate by the English artist Sam Meech [http://smeech.co.uk].  The order forms allow you to contract with Meech for “8 hours of labour by the artist,” which will be “carried out using a domestic knitting machine [and] result in the production of a knitted banner.”  But the conclusion to that paragraph emphasizes (in bold text) that, “the knitted banner is not ‘the work.’  There is no ‘work’ — there are only contracted hours of labour.” 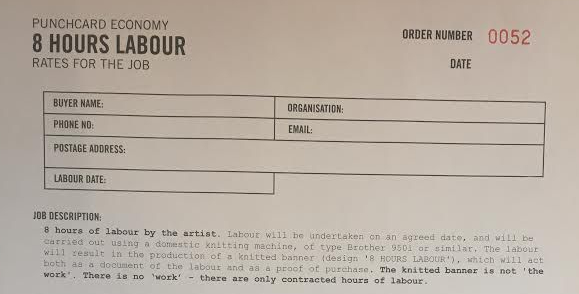 Indeed, the Terms and Condition reiterate this point: “I understand that the knitted textile that results from this labour is simply a document and proof of the labour, and not an artwork, and has no value in and of itself.”

Wrapping your mind around this requires questioning the boundaries between wage labor and artistic creation; and between a commodity, a work of art, a contracted service, and a receipt.  And it’s not just idle questioning.  Rather, it serves to surface the contradictions in the silent trend towards the commodification, valuation, and quantification of all human creation (and even human life itself).   Art can serve to rough up the smoothing function of our economy and is a fly in the ointment of the transformation of human life into data.

In his talk at the Art:Work exhibit, Ramon Amaro [https://www.sambarhino.com/] spoke at some length about art’s role in maintaining the non-identity between humanity and its data, about between our incalculable value as living beings and our value in dollars and cents (see “Debt: Updated and Expanded: The First 5,000 Years by David Graeber  for a breathtaking book-length treatment of this distinction, as well as the implications of its erasure):

“Art is space that challenges what it means to be human, as well as what it means to be human as data… As machines continue to simulate this role in themselves the question remains whether art will maintain this tension in order to speculate a new way of future being, or whether it will succumb to the terms of capitalism, which as we know is expert at making use of the algorithm to drive the separation between its own aims and the value of life.”

It’s worth unpacking what I think Amaro is referring to.  Algorithmic processes turn our personal data (the quantification of our human behavior) into value (to be purchased by advertisers, surveilled by governments, analyzed by pollsters and market researchers, etc). They package us so that they know what book we might want to buy next or what TV show we might like to watch.  This is reasonably framed as fulfilling our desires.  To fulfill our desires, Netflix, Amazon, etc have to understand them, right?  And getting personalized ads or a curated reading/viewing list seems like a small price to pay for free email, search, apps, and social media (as well as low cost access to massive libraries of media).

If our data is so valuable, how come we have no negotiating power about the value we get in return; it’s free email, social media and smartphone apps, or nothing at all (here’s a video of Jeron Lanier outlining the economics of this.) When Meech offers eight hours of his labor, we receive his knitting as proof of this labor.  But that’s not the only feature of the knitting: each stitch itself echoes pixels in the data it communicates and the visual effect on the viewer – [http://knitting.smeech.co.uk/8-bit-knitting-superbyte/] .

In Meech’s remixing of traditional and contemporary forms—of outdated craft and smoothed digital production—we see his efforts to unsmooth a narrative of economic and technological progress, and heed Amaro’s call for art to “maintain this tension between [humans in their humanity, and humans as data machines for the algorithm]  in order to speculate a new way of future being.”  In confounding easy categories of work, art, value, etc., Meech might make us wonder what it is, exactly, we’ve agreed to in our digital age, and what exactly we’re getting in exchange.

It’s probably a worthwhile exercise to look at the art around us and consider how (and whether) it’s doing the same.