Trust me when I tell you that I’m not one for cyber-hype.

I was over the whole cyborg-thing before there even was an Internet.  Nearly three decades ago, my fellow undergraduates wrote endless bad papers on Blade Runner, and I just wondered if I was missing something. Perhaps it was better with a little weed—“What if our memories were, like, implanted or something?  I mean, how would we know?”  “If we had someone else’s memories, would we, like, be someone else?”  Yeah.  Right.

Pardon the namedropping, but I even saw the Director’s Cut of Blade Runner with Slavoj Zizek.  I hoped I’d realize what I’d been missing (and feared that he’d ask me my opinion), but I needn’t have worried: Zizek had already published his too-clever-by-half verdict on the film—

“the implicit thesis of Blade Runner is that replicants are pure subjects”; in other words, Harrison Ford was finally articulating what Descartes had tried to say, four centuries prior.

And I don’t think Zizek ever asked someone else about their opinion.

Maybe when Philip K. Dick published Do Androids Dream of Electronic Sheep in 1968, it was revolutionary.   Or maybe Blade Runner was more startling when it came out at the beginning of the Reagan administration than at the end, when I first saw it.  But it didn’t take long before it became well-worn territory (see: Total Recall, also based on a Dick short story), a sci-fi cliché.

Moreover, I simply found the theories of cyber- this or cyborg- that unconvincing.  Every era for at least the last two hundred years has declared itself transformed by ever faster, ever more turbulent, ever more intrusive technological change.  Marinetti’s Italian Futurists or McLuhan’s media theories have held up surprisingly well for the simple reason that the experience of being transformed by technology has been pretty consistent, even as the technologies have dramatically changed. 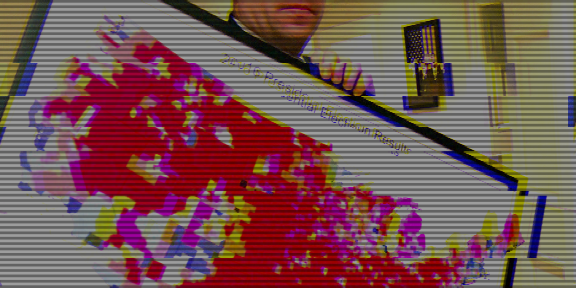 Then, exactly a year ago, I awoke to the shattering results of the US election.  Ever since then, I’ve been like most everybody else—wondering what the hell just happened.   But only recently have I formed my opinion.  No longer do I see it as a freak cocktail of a nativist rebellion against a globalized economy, a racist (and sexist) retrenchment against an African-American president (followed by a woman candidate), and a wholesale rejection of institutional expertise (journalistic, judicial, academic, or cultural).  No, what I once inscribed in an old narrative of rabble-rousing populism, driven by simmering resentments, tribal allegiances, and a propaganda machine on steroids, I now see as something that requires a new framework of understanding.

We awoke last November 12th in the rubble of the world’s first cyber war.

Even standing in the rubble, disoriented by this new reality, we couldn’t understand what just happened.  I always suspected that even well-informed Frenchman awoke on July 15th, 1789 completely bewildered.  And looking back, it’s obvious not even die hard Russian Bolsheviks really understood what was happening in 1917.  I had always wondered what that felt like to be confronted with a reality so new, so unfamiliar, that none of your categories held.  Until now.

Now I think I know, and there’s none of the euphoria or liberation I’d hoped for.  No, it feels terrible.  I’m enraged and disoriented, catapulted in one direction by one article, then jerked in another by a Twitter feed.  It’s not entirely wrong to find familiar frames for blame.  Indeed, there are clear echoes of familiar dynamics (especially race- and gender-based anxiety and hatred).  But every new genre is populated by stock characters from past genres, and it only gradually dawns on you that you’re watching something totally new.  None of the past categories is adequate; what you’re seeing is something truly unprecedented, and it requires new tools to understand.

What is cyber war like?  However you imagined it, it’s not like that. No, it’s like this.  Why would we ever think we could anticipate the unanticipatable?  We had a decade of Hunger Games and Walking Dead’s to hone our dystopian imagination, but if you want to know what a cyber dystopia looks like (and you live in the US), look out your window.   It looks less like the ascent of our robot overlords and more like a peasant revolt, with Rust Belt and Red State voters mainlining Russian propaganda, and the world’s greatest democracy punked by cyber-vandals, trolls, porn-fed misogynists, and alt-right hackers. Perhaps the technological dystopia arrived not via quantum AI, but on dumb algorithms intended to optimize ad revenue.  And perhaps it ushered in not an era of inhuman automation and robot overlords, but instead a chaotic stew of disinformation, epistemic mayhem, learned helplessness, etc.

Indeed, perhaps the most devastating of the unanticipatables is the cognitive consequences of the cyberwar.  Did we see the first hints of this in the Ukraine and Crimea?  It seemed like an old-fashioned, post-Soviet power struggle, until it devolved into overlapping disinformation campaigns so confusing as to render most of the world inarticulate and apathetic?  Was the outcome that we were so tuned-out that, when Russia shot down a civilian passenger jet, we could do nothing but shake our heads?  Is this what happens when our cognition, the collective norms of meaning making (aka our epistemological foundations), and our capacity for action are torn asunder?  We’re left, stewing in anger, furiously debating what it all means, and unable to act in any coordinated way. Isn’t that kind of how it feels now?

I don’t want to descend into primitive black-and-white, us-versus-them, before-and-after thinking.  But the shockwaves of our epistemic breach are still being amplified, and nothing is settling back to the old normal.  I fear we can look forward to more cyber wars, not fewer.  The front lines of these wars won’t be robots and cyber crime, but rather our disabled cognition and primitive psychic coping mechanisms.  With our own minds in rubble, we will have little with which to fight against the coming tide.