During this period of social distancing, Jews the world over took to video conferencing platforms like Zoom to celebrate the Passover Seders.  The Seder is typically the most elaborate family get-together of the Jewish year, with traditions passed down from generation to generation.  Elaborate meals, long recitations of prayers and rituals from the Haggadah, and raucous songs and celebration (along with four glasses of wine) combine to make it a favorite, among the devout and the secular alike.

Needless to say, Zoom and other conferencing platforms represent a dramatic change from tradition.  While not adopted by everyone, even some orthodox rabbis gave it their blessing, and in Israel, police and soldiers enforced the stay-at-home orders.  Given the wide array of virtual Seders to choose from—offered by my synagogue, Jewish community centers, campus organizations, among many others—I thought it wouldn’t be any problem to find one in virtual reality.

But I couldn’t.  A google search for “‘virtual reality’ seder” gets 86,000 hits, but all for virtual seders, not seders in VR, or, at best, 360 degree video footage of seders.  This is all the more surprising, as Jews have typically been early adopters of technology.  As a diasporic people, Jews have found the internet very useful.  I recall living in a small town in Virginia in the late 90s and finding many Jewish resources online that I might otherwise have had to drive for an hour to a major university library to find. A “50 top Jewish websites” article from 2000 already complains that many of the Jewish websites it checked out are technologically antiquated or obsolete.

Yet no VR seders.  Of course, it makes sense that some of the most active organizations online are orthodox and are therefore forbidden from using most tech on most religious holidays (demonstrating how remarkable the rabbi’s dispensation to use Zoom for this one is).  So it makes sense that groups like Chabad, who run extremely active and sophisticated online presence, would sit this innovation out.  But plenty of Jewish groups have long since abandoned the prohibition on tech, using microphones in synagogues, snapping pictures at bar mitzvahs, and streaming all their services online (even before Covid-19).

I’m pretty amateur when it comes to Seders, but I have a few I’m proud of.  There was the time my children re-enacted their liberation from slavery—starting out captive under the basement stairs, and, after demanding to be let go, pelting the adults with plastic frogs (plague 2), wild beasts (plague 5) and locusts (plague 8), while turning out the lights (darkness, plague 9) and finally running out in the yard, where they sprayed the adults with a garden hose (the closing in of the Red Sea on the pursuing Egyptians).  Then there was the maker Seder, inspired by my maker-educator-organizer-puppeteer partner Christina Cantrill,  where adults crafted their own liberation stories, using pipe cleaners, LED lights, yarn, and whatever else was around the house.

The point is, being creative while engaging tradition is half the fun of passover, so after a first night Seder with Christina, my daughters, sister, niece and nephew on Zoom, I contacted the two Jews I knew who had VR headsets to see if anyone would join me for second night Seder in VR.  While both had virtual Seder commitments with other loved ones, one friend and I agreed to hold a small portion of our Seder in VR, long enough to claim the title of the only Seder in VR that I could find.

The limitations were obvious: though we could gather around a table, I didn’t have time to find an environment that could support making the various ritual objects we would need (I’ve since read that RecRoom is perhaps a good environment to do this in); nor was there a platform where our non-headset wearing loved ones could follow along (AltSpaceVR offers its environment for PC users, but not for Mac).  But around sundown, my friend in Mexico City and I met in an AltSpaceVR meeting room, used their clunky web browser to project the Chabad Haggadah , and said the blessing over the first glass of wine, and made our little claim to the first VR seder (that I could find).  I even took a selfie to prove it: 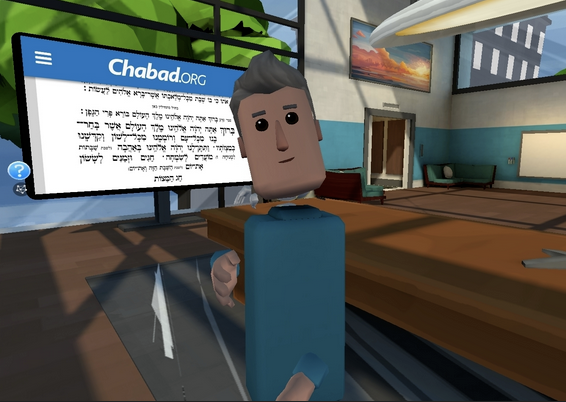 I don’t claim to be revolutionizing Judaism, and I’m sure there have been other Seders that I couldn’t find, but my main takeaway is this: while some aspects of VR are well trod and mature, others are just beginning.  In many ways, VR is where in internet was in 1994 or 1995.  Interacting socially feels a lot like early chatrooms and IRC’s.  And if there aren’t Seders yet, there will be, along with spaces optimized for family gatherings, business meetings, artistic collaborations, learning and teaching, and many others.  If you’re reading this and have suggestions for where these spaces are emerging, let me know.  And if you’re Jewish and want to go pioneer new spaces for our three thousand year old tradition, let me know that, too.